As the newest penultimate addition to the FoS collective (should any group of bloggers ever use the term collective?), I thought I should introduce myself to the other bloggers here at FoS.
Hi, I'm Lorax. Nice to meet you.
Clearly, I am joining a great group of scientists and am happy to add my ramblings here. However, I am also a competitive jerk. So when I read this cool post over at Skeptic Wonder, where Psi Wavefunction waxes poetic about Theratromyxa, I felt a rush of testosterone course through my veins. Amoeba, like Theratromyxa, are basically just free living macrophage *yawn*. Theratromyxa crawls to their prey (nematodes, which are microscopic worms), engulfs it, and then proceeds to eat the nematode. On the plus side Theratromyxa has two things going for it: 1. A single celled organism eating a multicellular organism is inherently cool, 2. Theratromyxa belongs to a group called the Vampyrellid, I mean that is awesomely cool.


However, if you want a truly amazing nematode hunter, let me introduce you to Drechslerella (previously called Arthrobotrys), a group of filamentous fungi that do something truly amazing! Drechslerella species grow as hyphae (the long spaghetti looking things) and can make spores (there's a collection of 5 cells that formed spores just North of center in the picture). OK, I'll admit that they are not much to look at. And unlike the amoeba, Drechslerella is non-motile, so it needs its food to come to it. If you are hunting prey that moves, but you do not, then you have a problem. Drechslerella deals with this problem in a way analogous to how we catch mice while we sleep, it traps it.
And this is where Drechslerella completely outcools Theratromyxa. I'll let the picture speak for me.
The above nematode has crawled into the fungal trap at two points. Along the hypha, a ring is formed by 3 cells. When a nematode enters the ring, these cells rapidly expand (~1/10th of a second) trapping the worm (see below, left and right top two pics). This effectively traps/crushes the worm, think about the last time you stuck your arm in a blood pressure sphygmomanometer (yes that's what those things are called). At this point, cells germinate, sending invasive hyphae into the worm which eats the worm from the inside (see below, right bottom two pics). 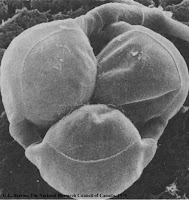 This leads to some pretty interesting biological questions. For example, fungal cells are surrounded by a cell wall, how does this expansion occur so quickly? How is the worm detected, are there touch sensors (yes) and do they act like touch sensors in our cells? Are these "trap" cell structures made all the time or only when worms are around? With organisms like this, what does it mean to be multicellular? a differentiated tissue? etc.

Now I should point out that many nematodes are detrimental to plants and biocontrols are sometimes used, including the use of Arthrobotrys (commercially still using the old name).

UPDATE: Checkout the noob, who bumped me for newest addition. You can learn all kinds of cool things about how the environment affects physiology!
The Lorax on Tuesday, August 03, 2010
Share